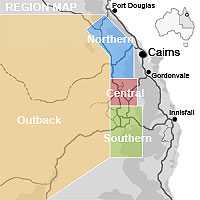 The Tablelands (Atherton Tablelands / Cairns Highlands) region is an area covering 64,768 square kilometres of diverse landscapes including world heritage rainforests and crater lakes, expansive savannahs and wetlands, along with a variety of rural and agricultural farming.

The Tablelands region has distinct natural beauty and biodiversity, including world heritage areas of environmental importance and a strong rural economy. The Tablelands are accessible from the coast via four major highways: the Palmerston Highway near Innisfail; the Gillies Highway near Gordonvale; the Kennedy Highway which passes through Kuranda and Smithfield to the north of Cairns; and the Rex Range Road near Mossman.

The Tablelands Regional Council formed in 2008 govern the area. It was preceded by four previous local government areas (Atherton, Eacham, Herberton and Mareeba Shires) which dated back more than a century.

Quality agricultural and horticultural land, complemented with an abundant water supply, all play a major role in the region’s economy. Currently four markets exist: domestic / local, niche, opportunistic and international. The Tablelands is also home to the many expansive dairy and beef cattle properties, as well as being host to a hub of mining and tourism activity. 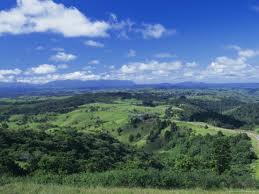 History and Heritage
The Tablelands region has an extremely culturally and linguistically diverse population. 60 different nationalities are represented in Mareeba - Dimbulah and the most commonly spoken languages, apart from English, are Italian (3.9% compared to 1.0% in Australia), German, Croatian, Dutch and Spanish. Throughout the region there are several museums and centres displaying and commemorating local history and heritage.

The Tablelands Walking Club promote and organize walking activities for residents and visitors to the Tablelands region of Far North Queensland. The club maintains a small book, map and video library for members.

Council aims to enhance cultural and artistic life in the region by supporting exhibits, displays, programs, workshops, events and activities by local residents.

Art Galleries showcase monthly exhibitions by local artists. Find out what's on in the region.There are 11 libraries located within the Tablelands region providing an extensive variety of books, videos, DVDs, music CDs, magazines, audio books, newspapers and jigsaws. Internet and computer access, photocopying and laminating are also available. If you live in the Tablelands, you are eligible for free membership.


Markets Every weekend markets are held throughout the region.