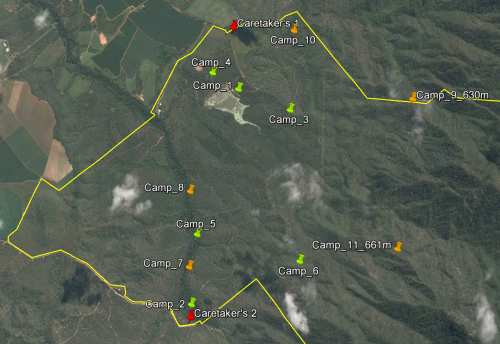 On 4th March 2015 the long process of our first development approval has finally come to fruition!!!

This was not a cheap process. It has already cost us about $10,000 in fees etc and we will need to pay another about $15,000 for access points and road contributions by the time we have fulfilled council conditions (that is without tracks, toilets building design and permits). So we have to attract a lot of well-paying campers to pay for it all.....

In the picture on the right you can see the two planned caretaker's dwellings as red pins, the first six camp sites as green pins and the five camp sites in the second stage as orange pins.

Now we will need to put in tracks and toilets for the camp site and collect building materials for the first caretakers dwelling and draw up plans etc...